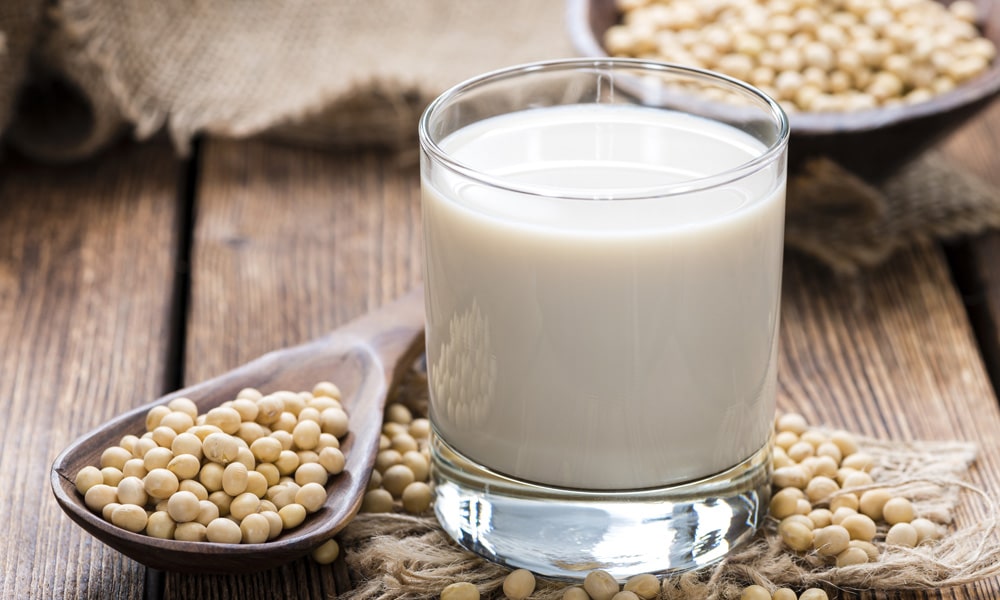 Should You Be Eating Soy? Setting the Record Straight!

In our comprehensive guide to Menopause, we talked about ways that women can minimize their menopause symptoms and reduce their risk of breast cancer and other diseases. One area that raised some questions from our readers was our discussion around eating foods filled with isoflavones found naturally in whole soy foods. Some of you were like, “Hang on a second—should I be eating soy products? Hasn’t it already been established that soy increases breast cancer risk?” Rightfully, you wanted to know why you should consider eating foods such as tempeh, sprouted tofu, and edamame when you’ve been told or have read that you should do the opposite.

The back and forth of information on what you should and shouldn’t eat these days can be dizzying. So, let’s clear the air. Given the conflicting information that has appeared in the news over the past many years regarding soy products, it’s a fair question and one this post will address in depth.

Soy And Your Hormones

Soy’s effect on our body begins at the hormonal level. In our body, we produce and circulate estrogen hormones. These hormones – estradiol, estriol, estrone – each play a different role at different times in developing and maintaining the reproductive system and female characteristics.

In addition to the estrogen we make, certain plant foods have compounds that have estrogenic activity— meaning they act like our estrogen hormones. These compounds are called phytoestrogens and are sometimes referred to as “dietary estrogen”.

Soy is not the only plant that contains phytoestrogens. There are hundreds of plant foods with varying degrees of phytoestrogens, including chia seeds, nuts, carrots, sesame seeds, oats, barley, alfalfa, lentils, yams, some grains, and legumes like soybeans.

The phytoestrogens in soy and other foods can be broken down into three categories: isoflavones, lignans, and coumestans. Soy’s phytoestrogens (genistein, daidzein, and glycitein) fall into the isoflavone category.

As mentioned in our Menopause post, isoflavones become problematic when they are isolated from soybeans, such as when they are in supplement form or in soymilk as soy isolate. Studies have shown that isolated isoflavones have a bad effect on estrogen-receptor positive breast cancer.[1] Specifically, “the probability of adverse health effects, i.e. that the long-term administration of isoflavone-containing food supplements or supplemented foods for medical purposes could increase the risk of breast cancer, is deemed to be high particularly in the risk group of menopausal women. More particularly women taking tamoxifen as medication to prevent breast cancer or undergoing adjuvant or palliative treatment for breast cancer should be informed of this elevated risk.”[2] As such, it is strongly advisable not to consume isolated isoflavones.

Yet on the other hand, just as strongly, the consumption of organic, non-GMO whole soy foods is highly advisable. Because when soy is consumed whole, it actually has an anticancer, antiestrogenic effect.

Within our reproductive tissue are proteins called estrogen receptors (ERs). The biological jobs that estrogens do are mediated by binding to these ERs in organs, such as the breast.[3]

Specifically, the role of these receptors is to “modulate biological activities, such as reproductive organ development, bone modeling, cardiovascular system functioning, metabolism, and behavior in both females and males.”[4] In other words, estrogen binds to the receptors, and the receptors tell the cells what to do and when.

We have two different estrogen receptors (ER)s each with different biological functions. One is called ER-alpha and the other is ER-beta. When stimulated by estrogen, ER-alpha is the receptor within the breast that tells cancer cells to keep growing. ER-beta, on the other hand, has an anti-estrogen effect.

When isoflavones do happen to bind to ER-alpha their signaling capacity is a fraction of the signaling capacity of our own estrogen. This means that the ER-alpha-bound phytoestrogen is taking the place of our estrogen and is playing the same role as the breast-cancer prevention drug tamoxifen; both tamoxifen and the phytoestrogens occupy and inactivate the ER-alpha receptors from growing more cancer.[5] Think of it as musical chairs where the bad guy (our own estrogen) is left standing.

The phytoestrogens from soy and other plants also act as aromatase inhibitors by stopping the hormones testosterone and androstenedione from converting to estrogen. Studies have confirmed this: people who consume higher amounts of whole soy products have a reduction in their circulating estrogen.[6] More isoflavones = less estrogen = less breast cancer.

The Power of Soy

One of the largest studies in this area comes from the Shanghai Women’s Health Study. They looked at the diets of more than 73,000 Chinese women and concluded that there is “strong evidence of a protective effect of soy food intake against premenopausal breast cancer.”[7] Another study looked at the diets of Asian women living in the United States and found that soy consumption starting from an early age resulted in the strongest reduction of breast cancer.[8]

If you currently have cancer and are taking tamoxifen, soy does not need to be avoided. In fact, the opposite appears to be true: In one study, close to 2,000 women on tamoxifen were followed for six years. The study found that those survivors eating the most soymilk and tofu had a sixty-percent reduction in breast-cancer recurrence when compared to women consumer less of these soy products.[10]

Soy also helps stop tumors from growing. Tumors flourish by taking over existing blood vessels and spurring on new vessels. This is called angiogenesis and isoflavones impede this process by helping to stop the growth of new blood-vessel cells. Without this continued blood supply, the tumor can’t grow.[11]

Besides soy’s antiproliferative, antioxidant, anti-angiogenesis, and anti-inflammatory properties soy is considered a complete protein, meaning it has all 9 essential amino acids needed by humans.[12]

Ready to Soy it Up?

If after reading this (and the annotated studies) you decide to add whole, soy foods to your diet, we suggest you strive for organic, fermented products. They not only have all the benefits listed above, but they are natural probiotics. Foods in this category include tempeh (fermented soybean cake), miso (seasoning paste made from fermented soybeans), tamari (gluten-free fermented soy sauce), and natto (a fermented soybean condiment/breakfast).

You can also add non-fermented options such as organic tofu, edamame (soybeans), and soy milk. Just make sure the first ingredient is “organic soybeans.” Put it back on the shelf if its ingredients are soy isolate or soy protein.

As always, we at Pink Lotus Power Up strive to remain responsive to what’s on our readers’ minds. We thank you for including us on your journey to optimal health.

KELLY LEVO
No Comments
April 3, 2020
166
I don’t share much online or social media other than pictures of my children. I have gone back and forth…
View

Lauren Panoff, MPH, RD
No Comments
March 4, 2020
470
Vitamin D has caught the public eye as “the sunshine vitamin” over recent years. While it’s been long studied for…
View

Corinna Underwood
No Comments
February 13, 2020
571
These days, women have many different options when it comes to birth control. Forms of hormonal birth control are not…
View

Dr. Kristi Funk
No Comments
January 14, 2020
810
Meet Eliza Ladensohn, who made the bold decision to opt against reconstruction after a double mastectomy – and she could…
View

Dr. Kristi Funk
No Comments
October 18, 2019
745
Meet Cheryl, tour manager to famous rockers like Slash and Blondie, who changed her life and went 100% vegan after…
View